Tips from the top: swim coaching with Bill Furniss

You know Bill Furniss, right? He coaches a swimmer called Rebecca Adlington. You might know her. She’s kind of fast.

Well, last week, poor Bill was coaching me. He was being pimped out by Speedo at a media day in London and Triathlete’s World magazine sent me along to meet him. (Here’s the resulting article.)

I wasn’t too sure what the day would consist of. I knew I had interview time with him, but then looked at the PR’s invite which mentioned something about towels and swimsuits, and I realised I’d actually have to swim in front of this GB Olympic coach. Good-oh!

We met at the lovely 33.3m pool at London’s Porchester Centre.

I was in the water with one other journalist and we did a few lengths to warm up whilst Bill cast his expert eye over our splashings. I got to the far end as he was going over a few points with the other chap. I waited til the chap departed down the length to put Bill’s advice into practice, and looked up at Bill….

“Well,” he said. “I saw you start to make your way up the lane and I thought to myself “oh good, this is all OK!” But then…you turned your head to breathe.” Bill made a face and waggled his arm in front of his body to demonstrate how, when I take a breath, my outstretched arm passes the ‘centre line’ in front of me, breaking my body position and slowing me right down. 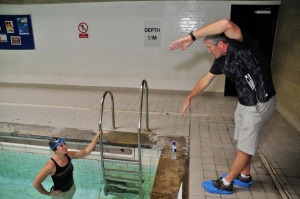 He asked if I felt as if I was getting slower despite having been swimming for ages, and then asked if I felt like I was slower than I should be yet couldn’t work out why. Erm…yes. Spot on.

The arm thing would be why, he explained. “Everything else is fine. Nice high elbows, good length of stroke, kick’s fine, nice extension. It’s just that crossing of the midline when you breathe. It’s putting the brakes on and wrecking all your good work elsewhere.”

I asked him what could be done and Bill explained that it’s really just a case of being aware of keeping the arm outstretched and the hands wide (in the proper place), whether you’re on a ‘breath’ stroke or not. He said I could try swimming a few strokes with my head up, then a few as normal and so on, just to get a feel for the proper position.

So I did. And you know what it was incredible! I can’t believe what lazy habits I’ve got into over time.

Once I’d got the hang of what I ought to be doing, Bill gave me some Speedo finger paddles to try.

I’ve used a range of hand paddles and gloves before but never finger paddles. Bill explained that they guide the hand as it enters the water and makes it really quite obvious if you deviate from the proper hand position at any point of the stroke. I really liked these little paddles (and they’re only £7!). They made a massive difference and I could really feel it when I took them off and swam a length without them. Definitely the latest addition to my kitbag. 🙂

Towards the end of the session, Bill asked us if there was anything in particular we wanted to work on. I said speed. Bill asked, somewhat cryptically, what I meant by speed? He pointed out that swimming faster isn’t about working harder. It’s about slowing the stroke right down and getting the longest length from outstretched fingertip to foot: “the path of least resistance”. The fewer strokes you take, Bill said, the less disruption there is to that long, outstretched period of time you’re cutting through the water.

Bill also spoke to us about the importance of pace and cadence (the latter being something cyclists are used to but not something swimmers often think about). It’s a personal thing, but the point is not to just work off the pace clock like so many of us were told to as kids. Finally, he talked about that elusive “feel” for the water, and said it often comes naturally (he saw it in a 12-year-old Adlington) but can also most definitely be learned.

To finish off, we did a length of swimming with closed fists (and counted our strokes: 30 for me), then a length with our fingers just closed at the knuckle (sort of a half-fist) (26 strokes for me) and then a length full-stroke (24 strokes that time). He then asked us to swim one length at a sprint but holding the glide section of the stroke for just a fraction of a second. His face was a picture: “that was 100% better!” he said.

Thanks to Speedo and Brand Nation for inviting me along and thanks to Bill for his time. Keep an eye on Triathlete’s World magazine for my interview with him – it’s packed with really useful tips for avoiding and correcting the most common freestyle mistakes.

Question: what’s your favourite bit of swim kit and why?

This entry was posted on Thursday, July 8th, 2010 at 9:01 pm and is filed under journalism, nicola joyce, Swimming. You can follow any responses to this entry through the RSS 2.0 feed. You can leave a response, or trackback from your own site.

6 Responses to Tips from the top: swim coaching with Bill Furniss