Recognise this face? Not mine! The chap!

Last week, I was invited to a media day with Liam Tancock. Our World Champion backstroker was going to be telling us all about his specialist stroke, giving us some pointers and telling us why backstroke makes for a buff bod.

Yeah, he knows a bit about that. That pic is for my sister. Sorry Liam 😉

Speedo were hosting the media day at the Porchester Spa in London. Just like when I interviewed Bill Furniss at the same venue, the session started off with us journos in the water, showing Liam what he could do. Or, in my case, what we can’t do. I can’t really do backstroke, you see. I mean, I can. But I can’t. I certainly don’t know what I’m doing.

Before my backstroke bunglings were revealed to the man who set a new world record for 50m backstroke last August, he asked us to warm up a bit with a couple of lengths of freestyle. As I returned to the wall and lifted my goggles, he smiled and said cheerily, “You’ve got a good technique.”

Hang on a minute. Let’s just back up a bit. Liam Tancock told me that, in his opinion, I have a good swimming technique.

We then started doing a bit of backstroke. I splashed my way down the pool, veering into the wall and hoping I wouldn’t bash my arm or head on the end of the pool (they hadn’t put any flags out). Liam told me that, for some reason, I was opening my hands (splaying my fingers) right out as I stretched out to put my hand back into the water. So, off I went again, trying to correct that. I hadn’t realised I’d been doing it but, once I concentrated on stopping, it became obvious.

One of the other journos asked Liam about getting cramp in the arch of the foot, and Liam talked to us about how important ankle flexibility is to backstrokers. Bill had dedicated a fair bit of time to the topic, too, even though he was talking about freestyle. Triathletes, work on your foot and ankle flexibility, particularly if you’re from a cycling background…all that time spent clipped in makes for inflexible ankles.

Liam explained that the force of the water on the top of the foot is considerable during backstroke kick and, if your flexibility isn’t great, you could get cramp. He showed us various techniques he likes for stretching his feet out, and his foot flexibility was incredible. He said that it’s really common for swimmers at world-class meets to stand around chatting, absent-mindedly flexing, pointing and stretching their feet out as they talk. They don’t even know they’re doing it, he said.

Liam then talked us through the fundamentals of backstroke: unlike freestyle, which is a bent arm recovery and an outstretched arm at the front of the pull-phase, in backstroke we have a straight arm recovery and a bent arm pull. The roll is hugely important in backstroke – Liam demonstrated how he’s almost continually rolling his shoulders and torso during the stroke, because a “flat” body isn’t efficient. He said that he takes around 0.6 seconds per stroke, so estimated the time he spends “flat” to be 0.1 seconds. He jumped in to show us how it’s done.

Efficiency is key, he told us. As with freestyle, the slowest and most relaxed stroke is actually the fastest way to move through the water.

He also talked to us about the push off the wall and the glide – it’s a way to cover the most distance with the least effort. In a demo, he dived in an glided under the water, arms outstretched and fingers clamped on top of each other, without kicking his legs once. He almost reached the other end of the 33.3m pool. 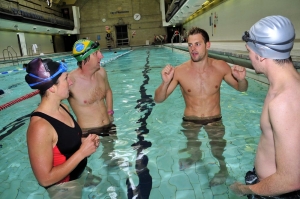 We all had a go, with varying results but similar amounts of giggles. Liam was almost crying with laughter at one journo’s belly-flop (hint, it wasn’t mine. I didn’t even try to dive in!)

Two of Liam’s many, many pool sessions per week are in a short-course (25m) pool. This, he explained, was so the swimmers can work on their starts, turns and glides more frequently throughout the session. He also told me that he does plyometric work as well as things like rock-climbing (in the off-season!) As you’d expect, he trains six days a week (with Sundays off) but – get this. When I asked him how many sessions (swim, weights, gym, etc) he does a week, he looked around as if grasping for some vast number and then said “well, it’s Wednesday lunchtime now and I’ve already done eight sessions this week.” And let’s not forget that he travelled to London from Loughborough today.

Swimmers work hard for their dollar!

PS A few days after our interview, Liam was given BUCS Sportsman of the Year award. Congrats, Liam!

PPS Liam is a jolly nice chap and you can follow him on Twitter here
Liam Tancock is a Speedo sponsored athlete. For more info on Liam or Speedo please see speedo.co.uk

This entry was posted on Friday, July 23rd, 2010 at 1:13 pm and is filed under journalism, nicola joyce, Swimming, thefitwriter. You can follow any responses to this entry through the RSS 2.0 feed. You can leave a response, or trackback from your own site.