Pump up
My class – Ladies Physique – was on last which meant a lot of waiting around, but at last it was time to eat some sugary stuff and go and pump up. Hooray! I was so excited – not nervous – just raring to go and over the moon to be here and about to step on stage. I think I wasn’t nervous because all the hard work (and it had been hard!) was done, there was nothing more to do now other than get on stage and pose. To my surprise, it turns out I love being on stage in front of an audience (one reason I thought I’d initially only do one competition is that I had thought I’d find the whole “posing for judges under stage lighting in a bikini” thing terrifying…) I also felt a lack of nerves because simply being at the Final was a huge achievement for me. I didn’t need anything more, and I didn’t expect it either. The pressure was off. It was showtime!

Our prejudging (the bit where we wear plain bikinis and do the compulsory poses) went by in a flash, even though I think we were out there a long time. The judges moved us around a few times (the better to compare us with each other) and put us through the poses at least three times. It’s hard for me to remember exactly how it went, but I felt I posed OK, although I was disappointed to be moved to the edge of the line up more than the middle. I had it in my head that this was a bad thing, although people who know more about it than me later pointed out that this isn’t the case. I’m still not sure! 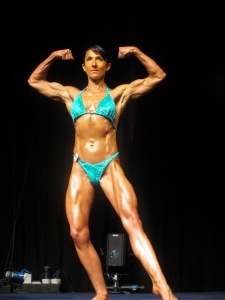 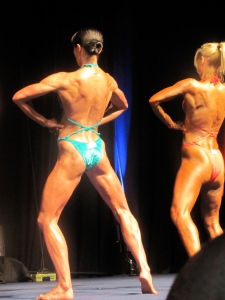 The posing was hard work; I was trying to remember to tense every muscle, and it was hot under the lights. I came off stage out of breath, sweating and… totally unsure how it had gone.

To be honest with you I felt a bit flat. I didn’t feel down, I didn’t feel up. I felt… really unsure! I think the enormity of the occasion had overwhelmed me and I realised that I had absolutely no idea where I might stand in terms of judges’ scores. The class of seven was the largest I’d ever been in, and the highest quality.

I was knackered, which didn’t help. So I went to meet my family and friends and we went outside for some fresh air and a chat. Hanging with them lifted my spirits and it was great to hear their take on the day so far. 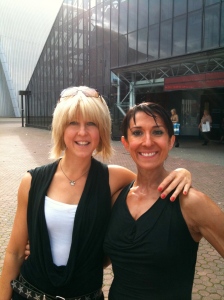 Night show
Before long it was time to go back in for the “night show” – the bit where each competitor performs their individual posing routine to music of their choice. Again, we were on last, and it was evening by the time we went on. I still felt a little flat and couldn’t work out why, but knew I needed to buck up. I was at the BNBF Final! My entire season so far had led to this day, this moment. I gave myself a talking to and resolved to enjoy every minute, since it would soon all be over and I might never get this opportunity again.

More sweets, another pump up and it was time to line up in order. I was no.5 in our class, so I watched the four ladies in front of me do their routines. They were fantastic and I knew then that I certainly hadn’t won Best Presentation! 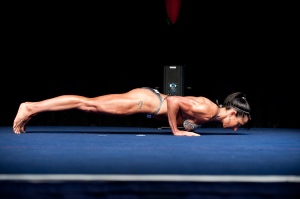 Suddenly the MC was calling my name and I ran on stage, waved to the crowd and got into position for the start of my routine. I felt great. I love my routine and I know my family love it too, so I performed it for them. I truly put everything into it, little extra flourishes and complete effort. 60 seconds later and it was over – a quick bow, wave and a run off-stage. (There’s a video of it here.) 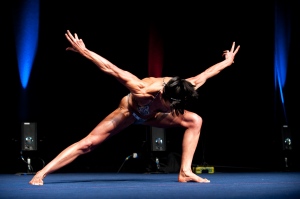 After the routines our class was called back onstage for one more set of poses for the judges. This was it. The results were moments away. I remember telling myself “every step, every rep….”, thinking that every single step of cardio and every rep of weights (not to mention every bit of dieting) had led to NOW. This was it.

After the poses was the crowd-pleaser: the pose-down! I had resolved the night before to really get in there, to forget about being polite and not to get stuck out at the edge like I’ve done before. It was fun! I even threw in some random shapes which aren’t real poses; I’ve no idea if they looked OK but I had fun doing them!

Results
It was time. We were asked to line up at the back of the stage whilst the judges’ score sheets were handed to the MC. By now I had allowed myself to believe I was in the top five, which would mean some kind of trophy to take home. 5th place was called… not my name. 4th place… not my name.

Oh my God. This either means I’m in the top 3, or I haven’t placed at all. 3rd place was called… and it wasn’t me. It was the lady who came 2nd at last week’s NPA show, and I knew we were very closely matched.

I knew I hadn’t won, I knew that for certain (not in a defeatist way, just a realistic one). So… was I 2nd? Or had I not placed?

“Ladies and Gentlemen, your runner-up is…. Nicola Joyce!”

I couldn’t believe it! I had come 2nd, runner-up only to the winner, the woman who had won Pro status! I stepped forward to receive my frankly enormous trophy and just felt… overwhelmed.

The MC called the winner’s name and I nodded and clapped. She absolutely deserved the win and I had felt that she would. She is now a Professional bodybuilder! 🙂 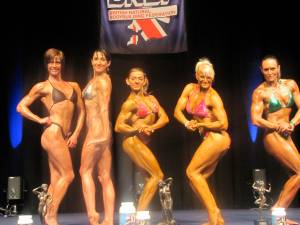 We had photos – all of us, top five and top three, before we were asked to leave the stage so Chiara could have her winner’s photos by herself. 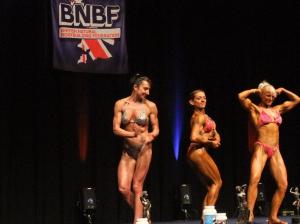 I walked off stage in a daze. What had just happened? Runner-up at the British Finals?! In my third competition?

The law of attraction? 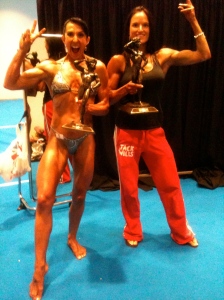 One of the first people I saw was Lucy, who’d come 2nd in Figure. Here’s a secret. The night before, in our flat, we’d confided in each other that we didn’t want to win. We said it quietly to each other because, quite honestly, it seemed a bit wrong to say something like that. But we were just chatting and discussing what-ifs. We agreed that winning – whilst amazing – would be too much for us. The Pro Card – whilst fantastic – would be too much pressure in our first year of competing. 2nd place, we agreed, would suit us just fine. We then laughed because 2nd place was pie-in-the-sky stuff and we felt foolish even having the conversation!

I went back to the near-empty changing area and got into my party dress, beaming from ear to ear. I packed my little case in a daze. It had all been worth it. Every step, every rep, and more. 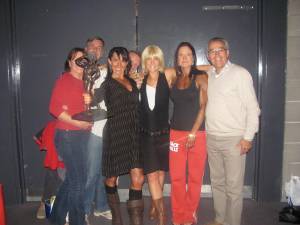 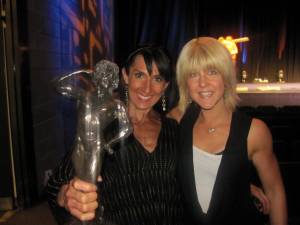 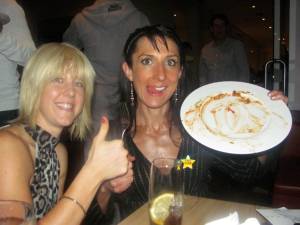 Thank you for reading.

This entry was posted on Sunday, September 25th, 2011 at 8:17 pm and is filed under bodybuilding, nicola joyce, photos, race report, thefitwriter. You can follow any responses to this entry through the RSS 2.0 feed. You can leave a response, or trackback from your own site.