So, the season is over. I’ve competed in my final bodybuilding competition for 2011. It was a long time coming (my competitive season started in the first week of July, and of course dieting for the first show started long before that). I feel a mixture of emotions now it’s all over, mainly a real sense of contentment in what I achieved and how I achieved it all.

This time last year, I had just finished a pretty full-on triathlon season, done several bike sportives and a half-marathon. I was just starting a personal body-transformation type challenge, based on weight training and nutritional tweaks. The idea of competing in bodybuilding hadn’t even crossed my mind.

And – the subject of this blog post – 3rd place, NPA British Final. (Photos are here.) 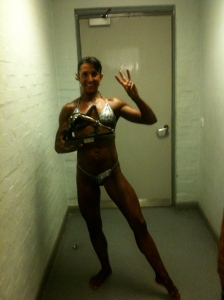 It’s been quite a year.

I had a few goals for this Final. In an ideal world, I wanted to place, to not come dead last, to get a trophy to show to my long-suffering, ever-supportive family. But honestly? My main goal, over and above all of those, was to enjoy the day. I simply wanted a completely positive, happy and fun end to the season. And I knew I wouldn’t find that in a first-place finish or a trophy. I knew it had to come from my own attitude and from the atmosphere of the show. 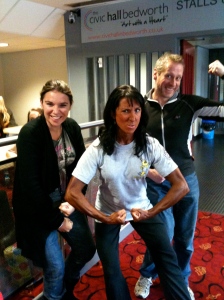 Happily, I got it. From the moment we turned into the car park and I saw Anna Millington (against whom I’d competed at the BNBF Final), who spotted me and waved madly through the window, to the moment we left at the end of the night, the NPA Final was nothing but happy for me. And that means so much.

But let’s back up a bit. My class – ladies Physique (aka women’s bodybuilding) – was going to be split into two weight classes: U55kg and O55kgs. At my first show of the season, I’d weighed in slightly under 55kgs, and at my NPA qualifier I’d been bang on 55kgs. A few weeks ago, I’d thought I’d be able to diet aggressively and come in just under the cut off, therefore being the biggest in the lightweight category. However, as the show got closer, I realised this probably wasn’t going to happen. I’d been dieting for an extremely long time and my body (and my mind) had started to run out of oomph! So, as it was, I weighed in at a fraction over the cut off. My worst fear had come true: I was going to be one of the lightest, if not the lightest, in the heavier of the two classes.

Oh well! It was what it was and I really didn’t mind. Both classes were extremely competitive and quite honestly I wouldn’t have liked to choose which one to go in. Rocks and hard places spring to mind! Michael from the NPA gave me the opportunity to go away and “try again” but I knew that, realistically, I’d have to drop one or two internal organs down the toilet in order to come in under 55kgs and really I wasn’t that bothered. I’d weighed in over the cut off, so that’s where I would compete. I could only do my best anyway.

I was in the weigh-in queue with two of the other O55kg competitors and we chatted, laughed and joked the whole time. We followed each other upstairs to bagsy ourself a dressing room and the lighthearted, amicable atmosphere only got better from there. I truly had a ball with these ladies (and the others who later joined us in the dressing room) all day long. Despite it being a British Final, there was not an ounce of tension in the air. We shared food, makeup and tan, glued each other, glazed each other and chatted all day long. It was absolutely lovely – and, if any of those ladies are reading, I’d like to officially thank you now for helping make the day such a happy and positive experience.

We were on relatively early in the running order, so just about had time to finish off makeup, glue ourselves into our suits and spray ourselves with glaze before it was time to eat some sweets and get down to the pump up area. The U55kg ladies were on before us, and all three of them looked razor-sharp.

I was first out, and led our group of four onstage for the prejudging. Ahhh…. this is it…. the final time onstage for this year. I felt so relaxed and happy – possibly too relaxed, because I came off stage unsure that I’d worked hard enough. I was shaking and sweating from the exertions of posing, but I felt so happy that I couldn’t tell whether or not I’d done myself justice. I do remember being put through the 1/4 turns and compulsory poses at least three times, and being moved about in the lineup three times. 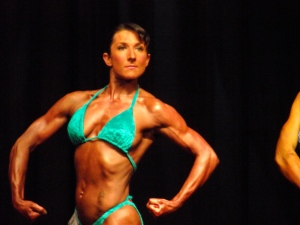 I went to join my family in the auditorium, watched some of the other classes and then watched the phenomenal Helen Stack (WNBF Pro) do her guest posing spot. She was truly inspirational to watch. 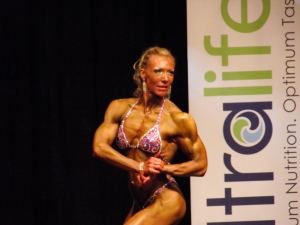 After an interval (I wasn’t hungry or particularly thirsty, but I could have killed for a simple cup of tea!) it was time to go and change into our sparkly bikinis, because it wouldn’t be long before the nightshow, where we’d do our individual routines. Once again, we were able to watch the U55kg women from the wings, and they all looked amazing. I wouldn’t have liked to be judging that class!

As usual, I had no inkling of where I might place in our class of four. I was 100% certain I had not won – I felt as sure as I could be that Anna M had won. She was in incredible shape. Other than that… I really couldn’t have told you. 2nd, 3rd, 4th? Who knows! I quite fancied coming 2nd or 3rd, because that would mean a trophy, but by this point I was really having such a lovely day that I was happy just being there. Backstage had been like one big party all day long: bodybuilding friends gathered together to put on our gladrags one last time and have fun posing onstage. Competitors and spectators both had baked cakes or bought sweet treats for friends, and you couldn’t walk through the auditorium without someone handing you a thoughtful little foodie gift.

Before long I was being announced on stage and I walked on, waved and paused for a moment before lowering myself into my first pose. I just wanted a split second to think to myself “this is it, this is the last time I’ll do this routine and, in about 5 minutes, my season will be over”.

My music started and I began my routine, turning one move into “blowing a kiss” (directed at my family; I’m not sure they saw!) I messed up two of the moves – I couldn’t believe I did that! – but got back on track. I finished, bowed and smiled, thanking the judges and the audience before running offstage to watch the other three do their routines. 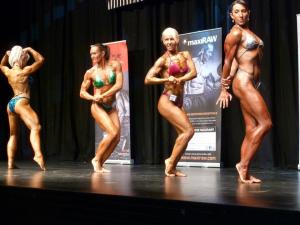 Then we were all back onstage for the posedown. I was determined to have fun with this bit! In my previous three competitions, I’d either been too scared or not known what on earth to do, typically getting stuck on one side of the stage and just doing a side-chest pose about a bazillion times. Between us, we’d discussed the fact that we all wanted to have a lot of fun and put on a show, and we really went for it. Back to back, busting out rival side-triceps. Face-to-face, popping a quick most-muscular. Spotting someone else doing a rear-double-bicep, dashing over and trying to out-do them. It was such fun and we were actually laughing out loud on stage, which perfectly summed up the atmosphere we’d enjoyed all day in our dressing room.

It was time to stop laughing and start lining up at the back of the stage. Results time. 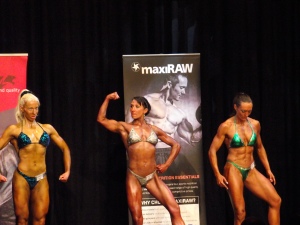 I stepped forward, elated, relieved and… satisfied. That may seem a weak word to describe the feeling of coming 3rd in a British Final but it’s perfect for how I felt. Contentment, happiness, a sense of peace. 3rd was just right. The last few weeks of this prep hadn’t been perfect, I’d struggled to keep pushing and my focus had shifted from a burning desire to win to a sincere wish for a positive end to a great season. You know when something just fits? Well, 3rd place felt a perfect fit for me. 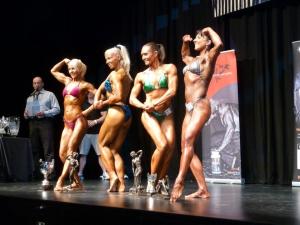 So, there we have it. 3rd place at my second British Final of the year. And I feel great. 🙂

What’s next? That’s probably the topic for a future blog post. I know I have a long way to go in this sport, and that’s fine by me. That’s what I want. I love that this sport is about the long-haul, the patient approach, the long-term gains. I already have a very vivid, very precise picture in my mind of how I want to look next year. I’m not sure how I’ll get there, but I know I will, and I’m excited to see it!

Thank you for reading.

NPA British Final – last show of my first year is a post from The Fit Writer blog.

This entry was posted on Sunday, October 30th, 2011 at 5:57 pm and is filed under bodybuilding, nicola joyce, photos, race report, thefitwriter. You can follow any responses to this entry through the RSS 2.0 feed. You can leave a response, or trackback from your own site.