Strong(wo)man competition and a 140kg deadlift

What’s filthy, involves a lot of pulling, and makes you feel like your insides might burst out through your eye sockets?

On Easter Sunday I did something a little bit different: took part in a local strong(wo)man competition.

I’ve done one previously but that was a private, gym-run thing. Whilst this one wasn’t a huge event, it was open to anyone and so I had no idea who else would be in my category – other than my pal Linda.

Linda is a powerlifter but we manage to peacefully co-exist training together at the gym 😉 She sometimes makes me go in the monolift, and I sometimes make her do 20+ reps of something.

We decided a while ago to enter this strongwoman comp, and headed up to Terry Hollands’s gym to train with real strongman kit (you can read about that here).

The events listed for our category were:

We did what we could in terms of training and preparation, but I’ll be honest: I didn’t really feel like I’d trained enough. I was hoping brute force and persistence would get me through. And my deadlift, which is decent.

Here’s how it went down:

Farmers Walk
The weight was no problem, but in the comp we had to turn around a marker. I’d only trained to walk, drop the handles, turn myself 180* and pick them up to walk back. Turning around the marker seemed a tricky challenge, so I went for “slow but steady” (to avoid falling over). Result? I came last in this. So I was first up in the…. 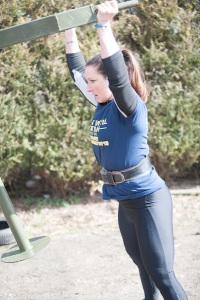 Viking Press
This Viking Press looked nothing like the one we’d trained on at Terry H’s, but it didn’t feel too bad. 55kgs is heavy, mind you! I think I banged out 19 reps in the minute, which is more than I’d done in training. The referees seemed impressed, so I had high hopes. Until the women who went after me got 20s… and 30s…. I think I was 2nd to last in this event.

Deadlift
I was looking forward to this! I love deadlifting lots, and rarely train for it in any kind of kit (not even always a belt). We were allowed belt and chalk, but no straps. 80, 90, 100, 110 went up just fine. 120 started to feel a bit heavy. 130 was a struggle but there was no way I wasn’t going to get it. 140 was scary. I have pulled 140kgs before, but so long ago I was beginning to think I made it up. In front of a crowd which included friends and family, I eyed that mofo up. If I started to lift it, it was coming all the way up. And it did… excruciatingly slowly and excruciatingly painfully. It felt like my insides were going to come out through my eye sockets, taking my eyeballs with them. A good look, I’m sure. Still, who cares, I legit pulled a 140kgs deadlift. With 3 of us left in at this stage, the refs put it up to 150kgs. I set up and gave it a pull. Nope. Not moving. I bowed out, chuffed to bits with 140.

Sled pull
We’d been expecting to pull a truck towards us, hand over hand, with a rope. That’s what we’d trained to do. For some reason, this event was replaced with a sled drag. The rope was attached to a prowler/sled which was loaded to (I believe) 140kgs. We had to sit and just heft the damn thing over the line. Trouble is, sleds aren’t on wheels, so there was no momentum. And we were pulling it over a muddy and stony surface. I went second or third on this, so the ground was still “fresh”. The sled got wedged behind a stone at one point and I genuinely thought I couldn’t shift it. With every competitor, the ground got worn down a little smoother until eventually the sled was (kind of) running in a groove. But I was still pleased with my time. This event was a lung buster!

Loading medley
I had no idea what we’d be loading. Hopefully not the stones, since they started at 80kgs. And ideally not those 55kgs concrete blocks. Oh, what’s that? We are loading those 55kgs concrete blocks? All 5 of them? And we’re picking them up and running them a short distance to a truck before chucking them in? OK, good. This was hard. I had no clue how to even tackle picking the blocks up (arms underneath and deadlift them up to lap them heft them in?) I truly didn’t know if I’d be able to do one, let alone all five. As it turned out, I managed all five with a few seconds to spare, and not before declaring “I’m going to die!” (rather dramatically if I do say so myself). “No you’re not,” was the response from the official!

I came 4th (of 5!) by just 1/2 a point, to my friend Linda. We had always said we were representing the gym, and she very graciously offered to share her trophy with me. It’s now on the shelf at the gym along with various other bodybuilding, powerlifting and strongman trophies.

There was a big gap between Linda and me, and the two ladies who came 1st and 2nd. They were beasts (in the nicest possible sense). Whereas Linda and I are just only slightly beastly 😉

I didn’t ache the next day… but by two days later I was sore almost all over. Traps, front delts, biceps, neck and upper back were all suffering. Lower back was feeling the effects of my max deadlift followed by the awkward action of the loading event. And I was so tired!

But it was great fun and definitely a good way to spice up lifting and strength training.

Big thanks to the organisers of the event!

Have you ever done a strongman or strongwoman competition? What was your favourite event?

Thank you to Linda’s partner Jeff for the pics

Strong(wo)man competition and a 140kg deadlift is a post from The Fit Writer blog.

This entry was posted on Thursday, April 9th, 2015 at 8:17 am and is filed under fitness professionals, nicola joyce, race report, strongman, thefitwriter. You can follow any responses to this entry through the RSS 2.0 feed. You can leave a response, or trackback from your own site.

5 Responses to Strong(wo)man competition and a 140kg deadlift