Today is the final day of Vegan Month, so I decided to go out with a flourish: by making homemade seitan from scratch.

Now, please bear in mind that I have never eaten seitan. Or even seen it. It’s very difficult to make something when your brain has absolutely no idea what the thing should look like.

It’s a vegan protein source often called “wheat meat”. It is made from vital wheat gluten (gluten is after all a protein – the protein in wheat, rye, barley and some other grains I can’t remember right now). Needless to say, seitan is not going to be good for coeliacs or Crohn’s sufferers.

But I have no reason to avoid gluten, so off I went to my local independent healthfood shop (holla Folkestone Whole Foods who were extremely helpful, and even high fived me!)

I used the basic seitan recipe from Fit Pro Client Recipes (which also has various recipes for how to use your seitan once you’ve made it). But, me being me, I adapted it a bit. Oh, and totally forgot to add one ingredient (I found it under my jumper halfway through).

Here’s how the seitan happened.

This makes it sound a LOT more complicated than it is. It’s easy. It took me about 15 mins (plus the steaming time). It’s essentially: dry mix, wet mix, combine them, knead it, steam it. 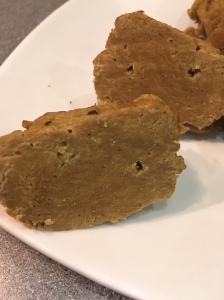 I’ll be honest, I didn’t calculate it. Sorry. But seitan is obviously high in protein (the highest protein non-animal source?), and the only added fat in this recipe is from the olive oil.

Wowsers! I am seriously impressed (so was the dog, as you’ll see if you have a chance to watch my Insta story in the next few hours).

It doesn’t taste like meat, but then again there is no single “meat” taste anyway, is there?

It tastes… hearty, and chewy, and of all the flavours you add to it. I guess you could make a more spicy version, or one with Thai/BBQ/Indian (etc) flavours to suit. You’d also use your seitan like meat – in a dish – so more chance to flavour it then too.

But honestly I just ate a couple of slices once it had cooled down, just like this. OK I’d just got home from the gym so I was hungry, but hand on heart I enjoyed it.

So – thank you to the people who challenged me to make seitan during Vegan Month! I’m really glad I did, and I will make it again.

Final Vegan Month round up post to come tomorrow. It’s been fun!

Nicola Joyce – the Fit Writer – is a freelance copywriter and journalist with 13 years experience in writing content and direct response copy for the fitness industry. Get in touch via Facebook, by sending a message here.

This entry was posted on Thursday, November 30th, 2017 at 10:29 pm and is filed under fitness trends, life, nicola joyce, nutrition, recipe, vegan. You can follow any responses to this entry through the RSS 2.0 feed. You can leave a response, or trackback from your own site.

One Response to Making Homemade Seitan for Vegan Month