In this blog series, I take inspiration from one of the day’s Olympic events. Today: the epic 4x100m final.

I ventured down to my local running track tonight and met with three good-humoured members of Reading Roadrunners (and a fourth – my friend Ellie Barnes – who volunteered to (wo)man the camera and act as commentator).

It was going to be a race which would stay in the memory for a long, long time. Those who were there would never forget it.

The special commemorative baton was unveiled.

First, the athletes were spotted warming up and practicing the all-important handover.

Then they lined up on the track at 100m and the crowd went silent. You could have heard a pin drop as these four talented track athletes prepared for the race of their lives. Would Gosling, with those long levers and suspicious amount of testosterone (being a bloke) power the team off to a storming start? Would Jenkins the little powerhouse keep the pace high in the crucial second 100m? All eyes were on Edmondson, the stalwart of the team, as she was charged with holding it together for the final handover. And Joyce. How would Joyce fare in that critical home straight?

We’d have the answers in just a few moments…

In an actually-not-so-bad-really time of 71 seconds, the team finished triumphant and breathing hard with the exertion. Well, it wasn’t tooooo far off the new women’s 4x100m World Record of 40.82!

Then, because it was a nice evening and that hadn’t really taken very long, they decided to all line up together and do a 100m race.

Gold to Gosling
Silver to Jenkins
Bronze to Joyce

But after the post-race interview, a heated dispute and much consulting of the ancient tome which is The Rulebook, Gosling was sensationally stripped of his Gold medal on account of being a man in a woman’s race.

So the final positions were

Gold to Jenkins
Silver to Joyce
Bronze to Edmondson

They took to the podium for an emotional rendering of the…er… Berkshire anthem.

How have the London 2012 Olympic Games inspired you today?

Posted by Nic at thefitwriter

In this blog series, I take inspiration from one of the day’s Olympic events. Today: track starts (athletics).

As luck would have it, I was due to have a training session with retired-400m runner Tim Benjamin, who now owns and runs a couple of fitness facilities near where I live. One – Five Star Health and Fitness on Vale Road in Windsor – is brand-spanking new… and amazing. I’ll be blogging about it soon but, if you’re in the area, check it out.

“Tim, you were a track athlete. What can you teach me, in about 10 minutes and without an actual track, blocks or hurdles?” I said.

Tim was stoic and unflummoxed by the prospect of teaching a bodybuilder in Vibrams how to be a track athlete. “Let’s do track starts,” he said.

Great idea! Five Star Health & Fitness has a little mini-track in the cardio area, for doing hops and jumps and crawls. Ideal for learning how to do sprint starts!

“You need to get in the correct position to drive out of the start at a 45* angle. Get the start position wrong and you’ll either go straight up, or you’ll lose a lot of power. Kneel down with one knee (right, if you’re right handed) just behind the line, then stand up without moving that foot. Position the left foot just behind it and out at hip width. Then kneel back down – your knees and feet are now in the right position. Your hands have to be behind the line, and you’ll be up on your fingertips. From there, push up onto your feet, raising your hips and keeping your back hollow. Now it’s time to drive off into your first stride. You’re aiming for full hip drive and one big long stride… “

Now, I am far from athletic, not blessed with speed and agility and have no “mind body connection” at all when it comes to this kind of thing. I can genuinely say I have never tried a track start in my life.

Tim, on the other hand, counts Marlon Devonish as a former training partner, was once ranked 3rd in the world, competed in an Olympic final (the 4x400m in 2004) and came 2nd in the World Grand Prix Final in 2005 with a PB of 44:56 for the 400m. So, he was an excellent teacher. And I actually ended up moving my limbs in more or less the correct manner and striding off down that mini-track! 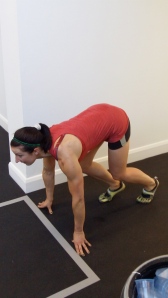 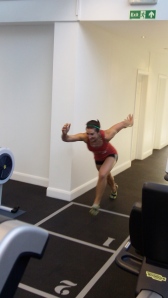 Wheeeee! Look at me! I’m running! 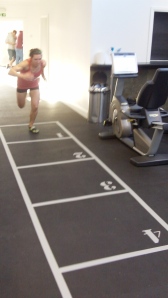 The fastest woman in the world…

How have the London 2012 Olympic Games inspired you today?

My Olympics: day seven, track starts (athletics) is a post from The Fit Writer blog.

Posted by Nic at thefitwriter